How do we define leadership effectiveness?

One of the activities I often do with students when introducing the idea of positive psychology in leadership is to ask them to select their favourite leadership quotation and explain it in terms of psychology theory and evidence.

Being positive psychologists, popular choices include:

This invariably leads to a deep discussion about what leadership is, how it feels to lead others, a thorough exploration of the many and varied leadership styles and theories and, something which is often overlooked, how leadership effectiveness is defined and measured.

As an example, take the recent demise of Tesco’s Fresh & Easy stores in the United States at a loss of between $1.2-$1.8bn and 5000 employees. Many column inches have been written about poor strategy, poor merchandising, failure to understand the differences between the American and British consumers and markets, and of course, who is to blame for this expensive mistake. The London Evening Standard puts this squarely at the door of ex-CEO Sir Terry Leahy, under whose leadership the original strategy was conceived, planned and implemented. The BBC reported that prior to this disaster Leahy was ‘lionised’. He was credited with overseeing Tesco’s dynamic development, including the introduction of the loyalty card, which led to it becoming the UK’s No.1 retailer and third largest globally. In retail leadership terms, Leahy could do no wrong – even his retirement was impeccably timed, shortly before Tesco’s UK sales slid for the first time in 20 years.

I’m sure you can think of stories of leaders once held up as role models, only becoming unstuck months or years later. They illustrate how difficult it is to define and assess leadership effectiveness: we tend to opt for a range of (relatively) simple, hard, financial measures; however, these can only be understood fully in the harsh light of hindsight.

So if determining leadership success using hard financial measures isn’t always reliable, what else can we do?

The science of positive psychology (its application within organisations generally and to the practice of leadership specifically) is bringing new thinking to this question. One framework worth considering is ‘Positive Deviance’ (Cameron, 2003). Normality or healthy performance is situated at the midpoint on a continuum, with positively and negatively deviant performance at either extreme. According to Cameron, outstanding performance can be attained when behaviours extend, in a positive way, beyond what is normally expected. 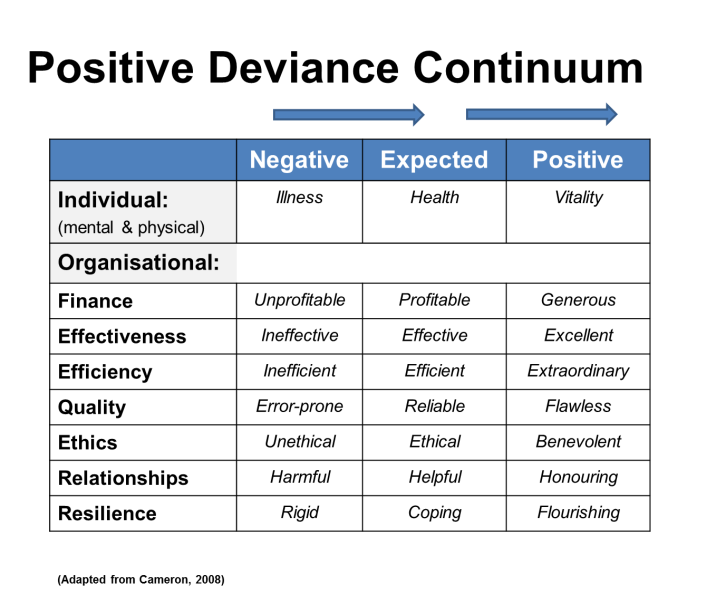 Negatively deviant behaviour (unprofitable, disengaged, unethical etc) is clearly problematic. However, in seeking to avoid it, most companies seem content to focus on becoming profitable, efficient and reliable, in other words, achieving ‘normality’ at the midpoint on the continuum. Indeed, market success is largely reliant on meeting expectations, as anyone who works in a quoted company knows.  Cameron suggests that by adopting positive psychology evidence-based leadership strategies, leaders can shift their organisations to the right of the continuum and achieve extraordinary performance.

To what extent are you a positive leader?

Studying the positive deviance framework in relationship to work really calls into question what organisational leadership is about and what success looks like. It also illustrates a fundamentally important point that the very words we choose to define and describe effective leadership and organisational behaviours can act as constraints: limiting, inhibiting, and closing down options and aspirations. Or they can be inspirational: motivating us to search beyond the ‘expected,’ and enabling us to strive to be exceptional in all senses of the world.

Positive psychology is sometimes accused of being wishy-washy and for some, positive leadership strategies can feel uncomfortable at first, but the evidence is clear. Yes the positive deviance model assumes financial profitability, efficiency, quality and ethical behaviours are a given, but suggests that they aren’t sufficient.

You’ll no doubt have noticed that the strategies outlined above involve soft skills, focusing on relationships, communication and developing others. Leadership success in this model relies on group achievement. As Peter Drucker once said, leaders don’t think ‘I’, they think ‘we’, they think ‘team’. Examples of companies being transformed through the application of positive psychology principles are now beginning to emerge, and I’ve seen leaders and their staff revitalised by the permission to focus on soft skills, to think about what good leadership really means to others, and to be more ‘human’ at work.

In reflecting on your own development as a positive leader, some key questions to consider are:

At work, to what extent do/can you