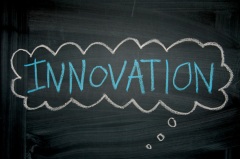 Innovation is a common topic of debate and strategy in most businesses (be they new or well established). In the current economic climate, and with the huge potential of the likes of social media data, brands are increasingly looking at innovation (large and small) as a way to beat the competition.

But innovation is often misunderstood. After a recent event debating the topic at the Open University Business School, I left with some insights into what the attendees thought that innovation was, and some misconceptions about what it has to be:

Five things that innovation is

Five things that innovation doesn’t have to be

Ultimately, innovation seems to depend on persistence, belief, adaptability, and relevance to customers and the market. While its success relies on people, behaviour and skills, and spotting and pursuing the opportunity before it’s too late. Undoubtedly money and resources help, but perhaps more of a barrier exists in the minds of employees and cultures of organisations?

(This article was originally published on FreshNetworks on 20th Dec 2012.)